The face of gaming is changing. According to Activision CEO Bobby Kotick, it’s no longer just teenage boys hanging out in their parents’ basements playing Mario Bros., Donkey Kong, and The Legend of Zelda. “Our single biggest community of players is actually 25- to 49-year-old women who play games like Candy Crush,” he mentioned on Leadership Live With David Rubenstein.

Kotick’s company, headquartered in Southern California, conducted a study that confirmed over two-thirds of mothers play video games across a range of platforms, including mobile, tablet, console, and PC. According to the study, “They view entertainment, including gaming, as an important and positive part of their lives compared to their non-gaming mom peers. Additionally, 57% of gamer moms believe entertainment technology improves their mood compared to non-gamer moms.”

Activision Blizzard isn’t the only video game developer and publisher with a thriving female fan base. According to current gamer statistics, 38% of the 1.33 billion gamers in Asia are women, while in Europe, 45% of gamers are women, and in the U.S., women comprise 41% of players. Mobile games, in particular, are popular with women, who tend to play games on their phones 25% longer than men.

“We make games of skill,” noted Kotick. He confirmed that the COVID-19 pandemic ushered in a whole new batch of video game players. “People who probably haven’t been passionate game players before are finding a lot of joy and satisfaction from gaming,” said Bobby Kotick. “The other thing is that gaming has become a very social experience. People are playing games, competing against people around the world. We’re building social connections with hundreds of millions of people around the world. We have the chance with our games to create heroes from diverse backgrounds and ethnicities. There’s an enormous amount of opportunity for building tolerance and understanding through video games.”

Female gamers are a valuable demographic, and they are absolutely adding to the success of Candy Crush, the free-to-play puzzle game that Activision’s Kong released in 2012. It takes a village to bring that colorful game to life and keep it exciting. Kotick explained there are 600 or 700 people in the development team on a game like Candy Crush. “They’re constantly introducing new content,” he said. 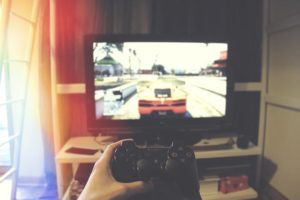 “Our biggest market is on phones, and Android is the biggest platform in the world for us, then iOS,” explained the Activision CEO. “As long as we know that we can create great, compelling, differentiated content [that] will support most platforms.” Kotick considers Tencent and NetEase to be his company’s two biggest competitors. “We work with both of them in China, but it’s difficult. I think we have very compelling content in China, but it’s a restricted market.”

Activision Blizzard’s mission has always been to connect and engage the world through epic entertainment. And just because it’s entertaining doesn’t mean that it isn’t educational. “For what you get from a cognitive perspective, there’s no question we see that interacting with video games has the ability to meaningfully improve your cognition. It has the ability to improve your spatial relationships with like three dimensions,” explained Bobby Kotick. “And in fact, there was a big wave of this in Japan. Nintendo launched a series of games called Brain Training. And most of the people who were playing those games were over 60, and they saw through all their studies noticeable improvements in cognition.”

Kotick said, “It is in the service of joy, but there is also a competitive dynamic, and esports have become a very big way to accomplish success in video gaming.” He pointed out that some players on professional esports teams make millions a year. “And so I might advocate for a kid who has a proficiency in gaming; there could be a great career for them as an esport athlete. So there’s really only benefit.”