The video gaming arena is packed to capacity with an exciting array of titles. It’s tough to pick one game over another, particularly card-based mini games. What’s great about these attractions is that they are peppered with intense subplots and side quests. Many examples abound, notably the Final Fantasy series which features an insane number of mini games available to players.

Of all the mini games that currently dazzle players, few are quite as absorbing as card games. Consider the runaway success of Witcher 3 as a case in point. This great game was launched a couple years ago, but remains one of the premier RPG games with its own inner-world card game. Let’s take a look at this and several other card-based mini-games from the world of video gaming! 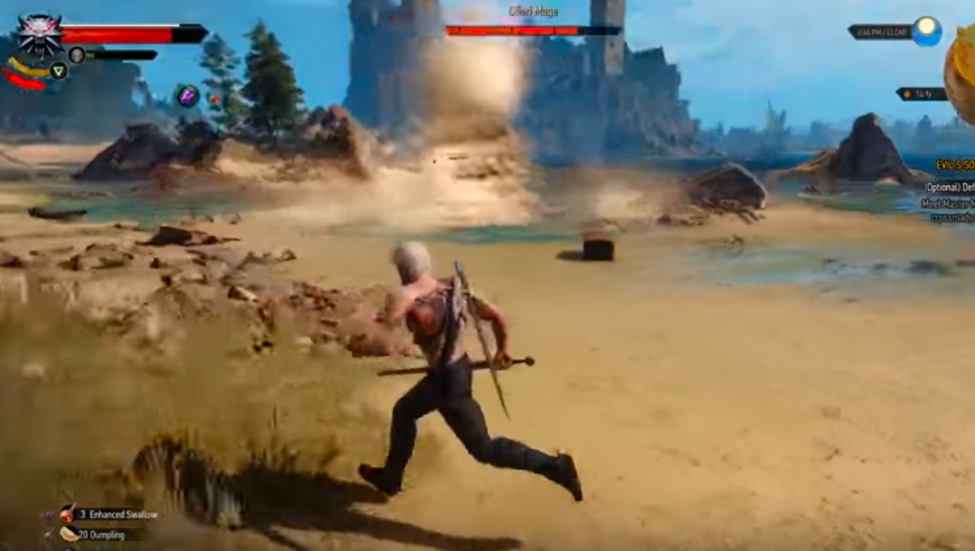 This card game is anything but run-of-the-mill. There are 2 players, each with 10 random cards. Each player takes turns placing cards on the board, one at a time. The strength of each card is determined by its point value. But it’s not only point value that determines who the winner is, it’s the ranking of the card. In Witcher 3 there are several different positions including melee, ranged, or siege. The board is divided up into rows, each one assigned to different positions. It’s more than a number-based logic game. This interactive title encourages lots of strategy-based gaming. It harkens back to those old school collectible card games, but this one injects just enough strategic gameplay to make it an absorbing card-based mini game.

Picture this: a post-apocalyptic world with nothing but mayhem and dreariness all around. Welcome to Fallout: New Vegas a.k.a. Caravan. The game plays out on the Mojave wasteland, otherwise known as New Vegas. Designed by the legendary game makers Caravan Guards, this game introduces players to a brand-new civilization created from the nuclear fallout of the past generation. There are multiple betting rounds in play, most of which take place at low stakes. The currency used by the characters in the game is known as NCR dollars.

You collect your cards throughout your time in New Vegas – but don’t expect a traditional poker game, blackjack game, or spin of the roulette wheel – this is a post-apocalyptic era, and it’s really dangerous out there. Your goal is to construct 3 unique stacks of cards known as Caravans. The sum total of each caravan is 21-26. It’s conjuring up images of blackjack isn’t it? What makes Caravan so impressive is that it’s wildly popular with poker players, blackjack players and traditional casino players, even if the rules appear to be entirely unique. 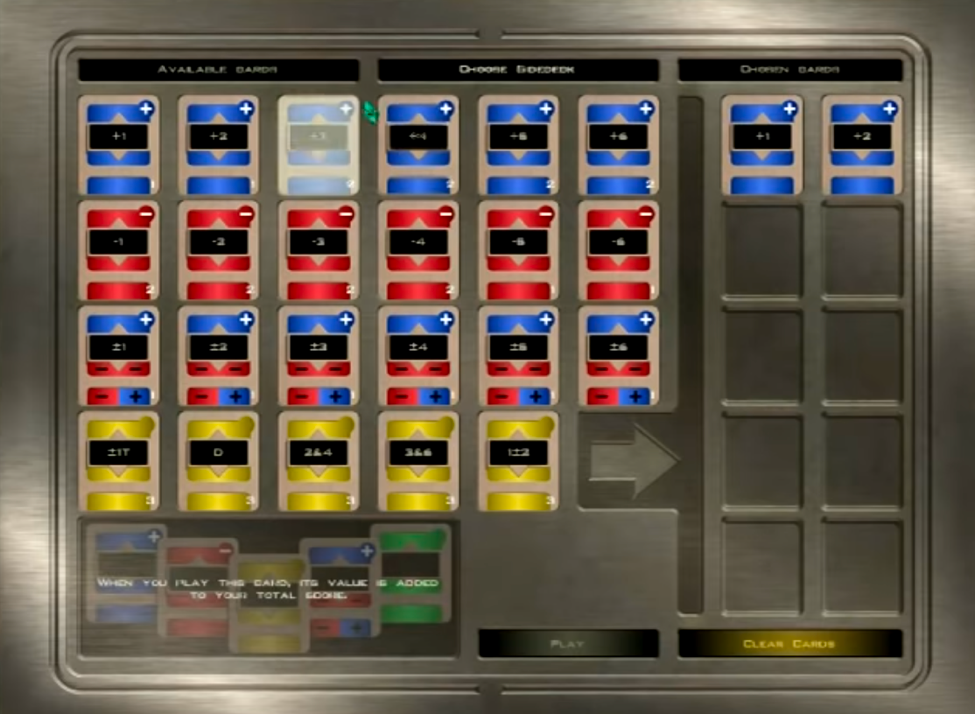 This card-based mini game is pretty phenomenal. It’s not a fantasy card game by any stretch of the imagination; it’s a future-oriented blackjack variant. That’s right casino fans, Knights of the Old Republic is a tour de force in head-to-head strategy-based gameplay. Players compete on 3 x 3 grids with cards valued between 1-10. Cards can assume positive or negative values.

When it is your turn to act, you will be dealt 1 card by the dealer and be required to play 1 card from your hand. The objective of this game – much like blackjack – is to compile a hand total of 20 without busting. If you exceed 20, you’re toast. The first player to win 3 games of Pazaak walks away victorious.

This game truly rocks! As a blackjack aficionado, there is just enough in this to keep you invested. This is strategy-based card gaming at its best, and there’s always a little twist in the tale. Rather than playing expressly against your opponent, you’re playing the best game possible on your own and so is your opponent – the end result is much easier to accept this way. 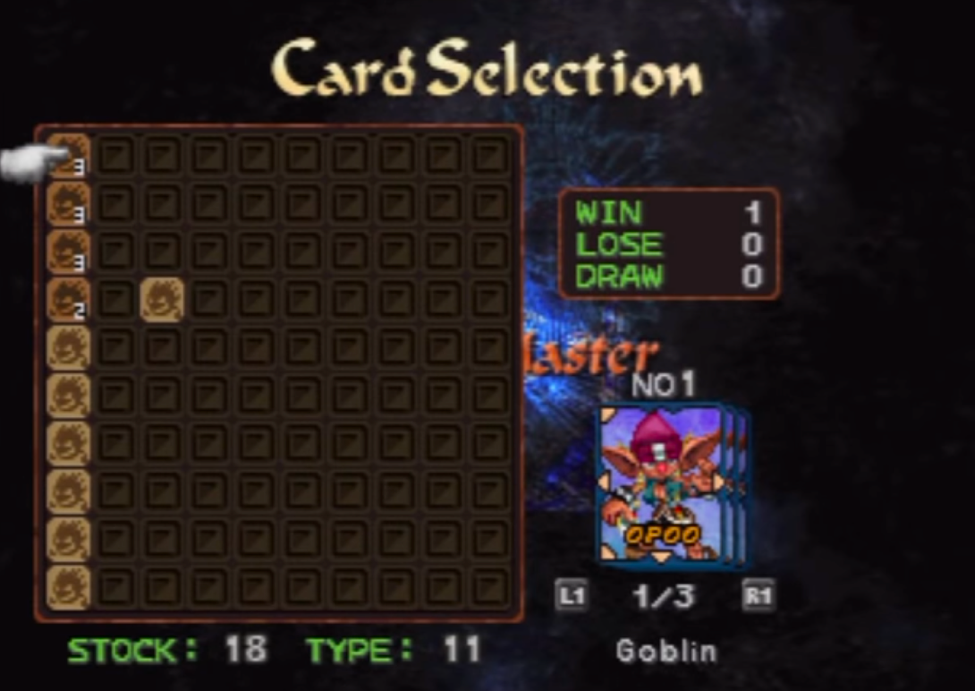 The Final Fantasy franchise is always a big hit with players. The card-based mini game in Final Fantasy IX is pretty spectacular. Known as Tetra Master, this card game is played on a 4×4 grid. The complex system which determines card values takes some time to master. Suffice it to say, there are 4 values for each card and they are designated in the following ways:

Tetra Master is unique. It takes quite some doing to decode this mini card game, but it’s much better than many other games of its ilk. If you don’t have the grey matter to understand this game, you probably better off with Triple Triad. 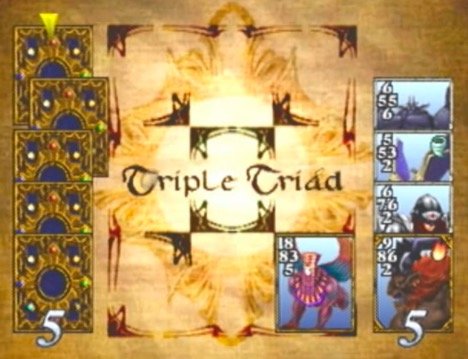 Final Fantasy VIII features a mini game known as Triple Triad. Believe it or not, this card game is a modified variant of tic-tac-toe. The game takes place on a 3 x 3 grid and each player is dealt 5 cards face down. One side of the card is blue and the other side is pink. These cards are based on in-game characters, including the monsters. Players are required to select a colour and then place a call on the 3 x 3 grid. Every card has a compass rose comprised of 4 unique numbers between 1 – 9. The ace represents 10. The objective of the game is to get the greatest number of cards in your colour. You can only flip the card over once per turn. In Final Fantasy VIII, only 5 cards are needed. Savvy?