The news media is abuzz in recent days with predictions of the takeover of the world economy by robots, software, and various forms of automated machine processes, collectively referred to by the vague but intriguing term “artificial intelligence” (AI).

The Huffington Post warns that robots that “can think and work problems faster than humans can” are on the horizon and may soon cause an unprecedented wave of human unemployment. The Washington Post, on the other hand, speculates that machine learning will drive us to ask such philosophical questions as “What makes us human when software can think too?”

And while this “Jetson-like” image of the future, where people will report to robot managers and machines will reach “singularity” and become capable of “independent thought” is as interesting as a real-life Sci-Fi adventure, the question we want to probe here is, “How will AI affect the future for business owners?”

The Changes AI Brings Will Vary Somewhat By Industry

At high levels, like making growth projections, analyzing marketing campaigns, managing employees, taking orders, and making deliveries to customers, AI and robots on the job site will probably affect nearly all businesses about the same.

However, it is easy to see that there would be some differences as well. Retail stores, for example, are projected to become essentially “showrooms” where you order products to be delivered to your home rather than buy them and carry them away in your own two hands. And the delivery agents, some say, may well be drones.

In the confectionery industry, we are already seeing robots capable of “seeing” and picking out malformed sweets off the conveyor belts and handling delicate sweets without breaking them. These are jobs once done by people and that bots do faster (and without risk of the worker taking liberties and having an on-the-job snack).

The restaurant industry is likely to see large numbers of robotic wait staff that are quite adept at taking your order without a glitch, though a niche for human waiters and waitresses may linger on as customers long for “the human touch.” Some may disagree with talking to a machine instead of a “real person” at the diner as much as they do now to talking to machines instead of customer service representatives on the phone.

AI may bode well for entrepreneurs looking to open a dessert franchise. The employees may be sparse as one robot tabulates all the details of your ice cream order: fudge Sunday, no nuts, chocolate and vanilla ice cream, real strawberries, colored sprinkles and a cherry on top. For a quick snack instead of a full meal, robots may well be better received as a wait staff. And you may be surprised how important your cyber security bot crew will be, as protecting customers’ personal data as they send in orders from their smartphones will be a top priority. 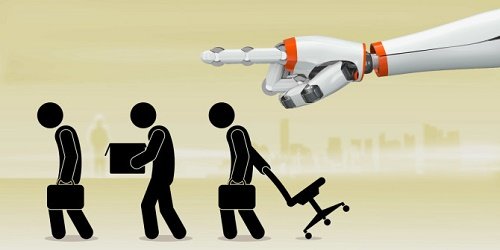 Business owners might, perhaps, prefer to avoid the managerial challenges that arise from employing people instead of robots, but the prediction that humans will lose all place in the workforce to machines is not at all realistic.

Nor is it supported by history to say that AI and new automation techniques will wipe out vast sectors of the economy and create epic levels of unemployment. The fact is that huge moves toward greater automation have already taken place during various phases of the Industrial Revolution without creating such disasters.

Instead, farm workers moved to the cities to work in the new, highly automated factories. Later, factory workers entered the tech market as computers spawned the beginning of recognizable machine intelligence. And where new automation is being implemented already today, workers are typically given new roles rather than let go.

None of this is to say there will not be job loss in the service industries like many predict or that machines are not beginning to do what only humans were once capable of. It is just to say that, as always, new jobs will open up when old ones vanish due to technological advances; and if past patterns persist, they will be better jobs as well.