With the glorious advent of innovative technology, big to small businesses now depend on the digital world to grow robustly in the global market. Since everything is going online, it is crucial for a business to have an online appearance.

Companies who are not online are failing to take advantage of the benefits digital world, consequently, missing out on many ample opportunities.

But, in the fast competitive market, there is an exceptional need for the speedy development process, swift deployment and prompt deliveries, bug fixes without excessive delays, less downtime and new feature release on time.

All these different tasks are either performed by individual specialists in the familiar field or are assigned to a dedicated team. But, the apparent lack of direct communication between them makes it hard to get the job done on time or efficiently produce the desired work.

DevOps is a solution to all these major problems. The buzzword is getting all the attention with many companies now embracing its principles into their business.

Let’s dive deeper into the subject of DevOps and see what it’s all about.

DevOps came from a very simple idea which is collaborative efforts help companies work better. DevOps is said to be an effective approach which offers the specific set of practices for continuous development and deployment of software and cloud application.

The Origins of DevOps

Patrick Debois coined the term “DevOps” which is the portmanteau of “Development” and “operation. Before he became the father of the”DevOps”, he was working a tester. He started working on a project with the primary responsibility of testing. His job role required him to communicate with both the development and operations. At that time, the two departments didn’t communicate much or at all.

Later, in the year 2008, Patrick Debois and Andrew Chafer attended the Velocity Conference organized by O’Reilly.  The primary focus of this conference was web performance and operations best practices.

Patrick was inspired by presentation, “Ten deploys a day: Devs and Ops cooperation at Flicker”, held his own DevOps event, DevOpsDays, in Belgium. Then the term “DevOps “came into existence become the buzz word in the IT community.

Today, DevOpsDays events are hosted globally. Organizations of all sized has adopted the DevOps in their business and many organizations are encouraging its employees to learn DevOps.

Many people either confuse the two or think it to be the same. The main difference between the two is that Agile focus is on the “development” whereas DevOps’s focal point is “development” and “operations” both. Overtime, DevOps proved to be the best practice to follow over Agile.

To further differentiate both, Agile involves people working in silos whereas DevOps is the countermeasure of silos which bridge the gap between the two important part of the development cycle. In DevOps, time and quality are the focus are of concern, smaller release cycle, and need for automation.

In DevOps Culture -Collaboration is the Key

DevOps focuses on creating a culture in which developers and operators work together but are not restricted to sit together in one room.

The DevOps is mistakenly taken as a culture where its methodology depends on the use of various tools to carry out the workflow.

Using all the necessary tools and then automate them to carry out continuous development, testing at every stage of the development cycle, more deployment, shorter time and more releases and feedback from customers, is the idea behind DevOps.

Everything is “Automated” in DevOps

In DevOps automation is the key where it enforces the idea of “configuration as code.” Automating the work process in DevOps is not an option but is mandatory to lessen manual work and save time.

Incorporating automation in building, testing and delivery, are typical starting points for the teams that are getting started with the automation.

Furthermore, automation in DevOps is not restricted to just “configuration of code” and “continuous delivery” but using automation in every step of the development of the final product.

There is a misconception about the tools in DevOps. Many still believe that in DevvOps environment, it is solely about using several tools to get different work done. But, in reality, it is about using the tools the way DevOps practices can be achieved.

Since, everything is automated in DevOps, the tools should be incorporated as such to. There are number of tools which are necessary in different development cycle. To learn DevOps, having know-how of the following tools is crucial for businesses.

To build and Deploy

These are just a few tools; you find others online to carry each step of development cycle.

The Mechanism behind DevOps Concept

According to the DevOps methodology, work is cut into smaller chunk which save time and shorten the release cycle.  Since, speed is the need of DevOp work mechanism, DevOps practices accelerates development and frequent high quality release.

The following DevOps work process is constructed on the continuous loop.

Need for DevOps – Why Is It Important Today?

DevOps was built to cater everyone involved in the software development process. It is based on the idea to eliminate as many issues as possible and provide automation in the infrastructure management for developers, operations, and testing.

For startups, the cost is the main issue and DevOps implementation helps cut down the extra expenses and meets the capricious demands of software security. 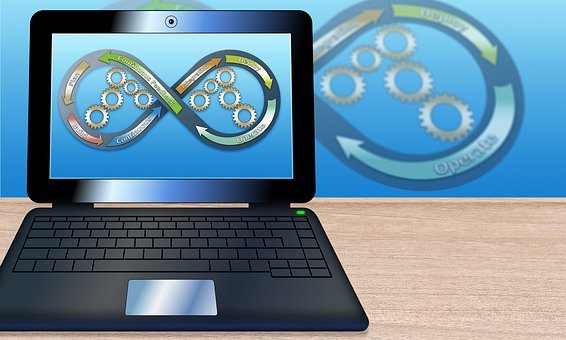 It’s without a doubt that DevOps is here to stay. Companies of all sizes are now consistently embracing the DevOps methods to give a more reliable end product to the customers.

People, who are interested in becoming the DevOps engineer, can find the best online DevOps training resources. You can additionally get yourself enrolled in cybersecurity Bootcamp training near you aligned with DevOps to get pro on this.

In terms of DevOps engineer pay scale, it has become one of the highest-paid jobs in the market today. Today, learning DevOps as a career choice is certainly the best option in the Information technology market.