The team of SysDev Laboratories has made a name for themselves with their innovative software tools that turn daunting data recovery challenges into easily resolvable tasks. Yet, this time, they have managed to surprise even their long-time users: the 8th version of UFS Explorer released this spring was really something with regard to novel features, and as it turned out, that wasn’t all. The product is still being enhanced and is able to show off many more interesting updates. Here’s a brief overview of the most noteworthy advancements added to the software for the past few months.

From the first glance at the list of changes, it is easy to observe that particular focus has been placed on the functionality related to data analysis and work with defective digital media. Among it one should single out:

Let’s take a closer look at the new features as well as the benefits they put forward. 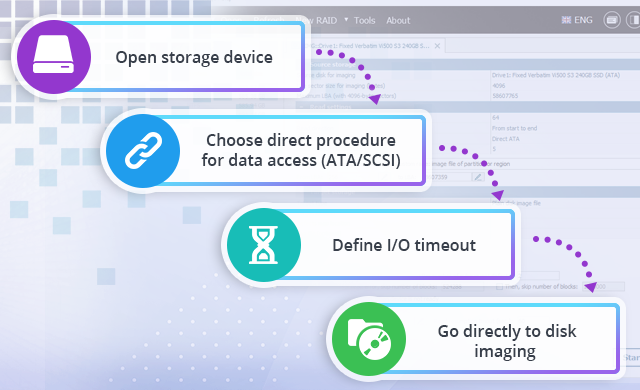 A new advanced mechanism for opening storage devices introduced with the 8th release allows you to choose the preferred method for access to data – using the standard “system procedure” or direct reading through an ATA/SCSI protocol with a timeout for cases when I/0 errors occur and other means for control over reading issues. The latter approach makes it possible to work with disks having damaged or poorly readable sectors that may simply hang and even break down during an attempt to access them using the default algorithm of the operating system. The dialogue allows you to start imaging the drive right away or choose the “Read-once” mode for saving any accessed data immediately to a “sparse image” file. Further read requests, in this case, will be addressed to the “cache”, so the number of references made to the same location on the original device can be substantially decreased. 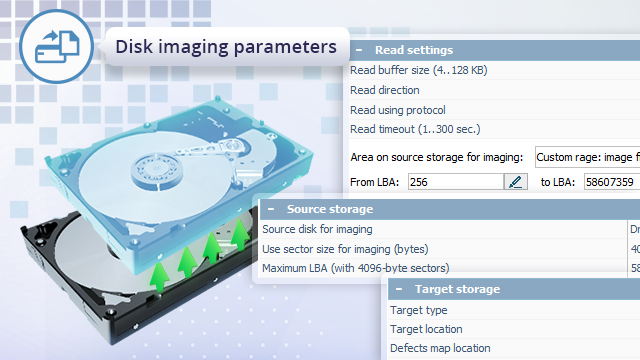 The disk imaging function of the software has been significantly upgraded, making the process unprecedentedly configurable. Not only does it create a simple bit-to-bit copy of a drive or partition but also allows specifying ranges that will be included to or excluded from the image file. Inter alia, such ranges can be provided in the form of a bitmap of used/free file system space or a selected group of files/folders. Moreover, it is possible to define various parameters for reading, like block size, timeout, direction and protocol, along with steps that will be taken by the program when encountering defective blocks – omission of a number of sectors after a succession of defects, referring to an established “test zone” on the disk or even its reset/restart. Such a strategy enables the speedy extraction of intact data with a minimized load on the faulty drive that otherwise may lead to its total failure.

The unreadable blocks skipped by the software during imaging are transferred to a special map of defects which can be employed during other manipulations with the storage.

Means For Virtual Imitation Of Bad Blocks In Various Operations

Apart from maps of bad blocks generated in the process of disk imaging, the upgraded software is able to utilize ones created by various compatible external tools. Moreover, it is capable of processing the information about the storage space occupied by a certain file system and use it to create a “mask” emulating defective blocks. Such a mask can be used in connection with a storage or partition and allows separating the data needed for an operation, for example, disk imaging or analysis of the storage content, from the one which must be left out. The masked locations can also be filled in with a pattern defined as plain text or as a hexadecimal value.

The updated software has gained even more control over disk imaging performed by DeepSpar DDI: now it is possible to image the drives connected to the board on the basis of a bitmap. Also, a network terminal added to the program makes it easy to connect to the DDI board or change the imaging settings directly from the interface without connecting to the computer and using the DeepSpar Control Panel.

Furthermore, the software is now compatible with the MRT Express and MRT Ultra systems through MRT Data Explorer – the data recovery module provided by MRT Labs for the retrieval of data from defective drives with an advanced mechanism of processing bad sectors. UFS Explorer supports Task files created by MRT DE and makes it possible to control disk imaging performed by the MRT tool, for instance, carry out “targeted” extraction of data from file systems unsupported by MRT DE. Moreover, the utility is able to create a span from the chunks of image files from an MRT Task and process the opened disk image using an MRT map of bad sectors for the identification of damaged files.

The upgrade of software has brought a broad set of new tools aimed at exceedingly effective analysis of the raw content of storages, partitions and files. One of the most prominent, of course, is the feature of reverse address translation, which allows following the allocation of data on storages that employ non-linear space addressing. Now it is possible to instantly go to the location of the data on the “parent” layer for different formats of virtual disks and disk images, spanned volumes, various types of RAID and RAID-based storages like Drobo BeyondRAID, Microsoft Storage Spaces and volumes created with data mapping, including Apple CoreStorage, Linux LVM with thin provisioning, supported encrypted volumes, as well as files opened in the hexadecimal mode. Address translation from the array component to the location on RAID is also available for standard RAID configurations and spanned volumes.

Several Modes Of Visualization For Convenient Analysis of RAID Data 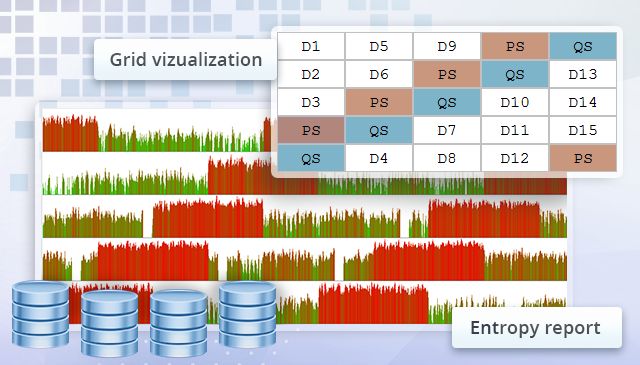 A new visualization option added to the instrument for building RAID allows seeing how blocks are distributed among the disks of the array by transforming it into a “grid pattern”. Depending on the level, the grid reflects such parameters as data/parity distribution, delay of parity, shift in rotation of data/parity and others. Using the grid cells one can navigate between stripes and move to the respective position in the hexadecimal viewer. Moreover, the software can now produce an “Entropy report” – a configurable histogram for all readable components of RAID which illustrates the regularities of data distribution on the disks. Such visualization makes it much easier to find parity blocks, as they will have higher entropy values on ranges with high data density. The histogram gets dynamically reconfigured to reflect the changes made in RAID settings and similar to the grid, allows navigating between data blocks/stripes or moving from the graphical display to the respective hexadecimal position on the storage. Both features greatly help in the analysis of RAID data required for the correct assembly of the array, especially when the order of components has to be established.

The reporting capabilities of UFS Explorer have also been notably extended. A report on the file system structure provides an interactive representation of the content of the chosen file system (either intact or reconstructed) which can be viewed in any web-browser and easily transferred to third parties. Over and above, the software allows saving a report with the information about the size of the data with the integrity verification of the files/folders metadata. Such a report also includes the number of “defective” objects, their total size and a list with locations and error types. When displayed in the interface, it offers the possibility to navigate promptly to the object’s location. When the files are being copied, the software allows logging files with reading errors and moving them to a “Bad files” folder. Besides, the most important events within the software can now be easily tracked with the help of an embedded log, which records the detection/removal of storages, identification of file systems, I/O errors along with other kinds of issues and processes that can be saved as a report together with their details.

The BeyondRAID technology implemented in Drobo NAS could previously be handled only by means of the Professional edition, which is way too expensive for average users (€600). Fortunately, with the latest upgrade, the support for such Drobo’s RAID sets has been added the RAID and Network RAID editions that are much more affordable (from €130). What’s more, the software now automatically selects the needed stripe size and identifies the Drobo volume together with the file system as well as its size, making the procedure considerably simplified. And even if it doesn’t work out with your case, you can still contact the company’s specialists and order a remote data recovery service at a favorable rate.

As can be noted, the range of improvements is quite impressive. If you wish to see and try out the new features for yourself, you can easily download the up-to-date software from the UFS Explorer website. The full list of all updates is also available in the software store of SysDev Laboratories.